Here's one of my walk-through articles on how to modify your Hori Fighting Stick EX2 that I originally wrote for Pineconeattack back on 12.07.2008. I hope this article will still be useful to those still modify and upgrading your fightsticks. I will keep it up here for archival purpose.

The Hori Fighting Stick EX2 is a good stick that I got pretty cheap, but like all stock joysticks, there are plenty of room for improvements. In my review of this stick, I brought up two minor complaints with this stick: mushy buttons and the square restrictor plate. Well, here’s the walk-through on how to fix these issues.  With a little soldering skill and plenty of patience, you can make this good stick into an incredible one and it’s not as hard as you might think.

(UPDATE: If you are looking for more joystick projects then head over here to add an actual Sanwa Stick inside your Hori EX2 or here to mod the MadCatz Fight stick.)

This is a simple project if you have some technical skills. This walkthrough is as simplified as I can make it so if none of this makes any sense then please DO NOT ATTEMPT. This project will void your warranty.

Attempt at your own risk!

Pineconeattack  (Outdated References) will not take any responsibility if you kill your joystick.

Unless you really like the stock art that came with your joystick, you will want to replace that decal with something a little more to your tastes with something cool looking; something that will make this joystick truly yours. Look for a nice high-resolution piece of art and download the templates here to size up your artwork perfectly. There is no use to start on this project unless you have the art printed and laminated. Once you size up the image file and have it printed out, head over to your local FedEx Office and have it lami-labeled.


Lami-label is the quickest and easiest way to protect your art from the oils in your hands. It’s a laminate with a sticky siding on the backside; it will literally turn your printed pic into a laminated sticker. Now that you have your art laminated and ready for install, let’s proceed with the actual mod. 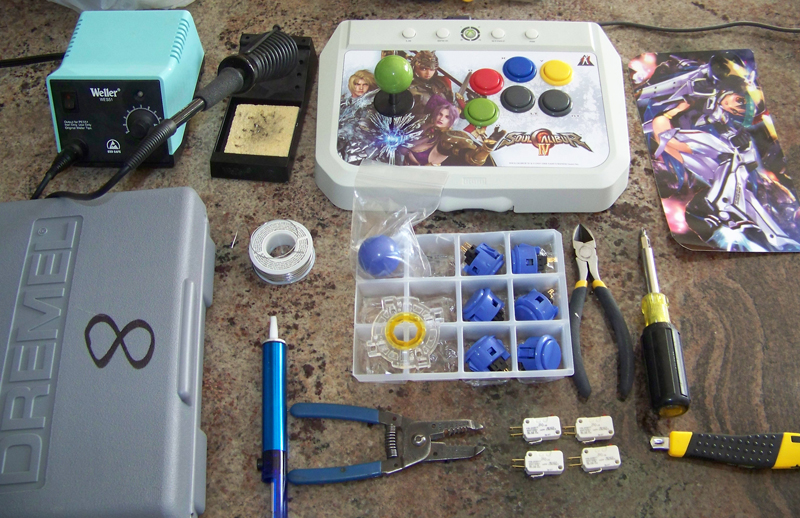 Here is the list of suggested tools you will need for this project: 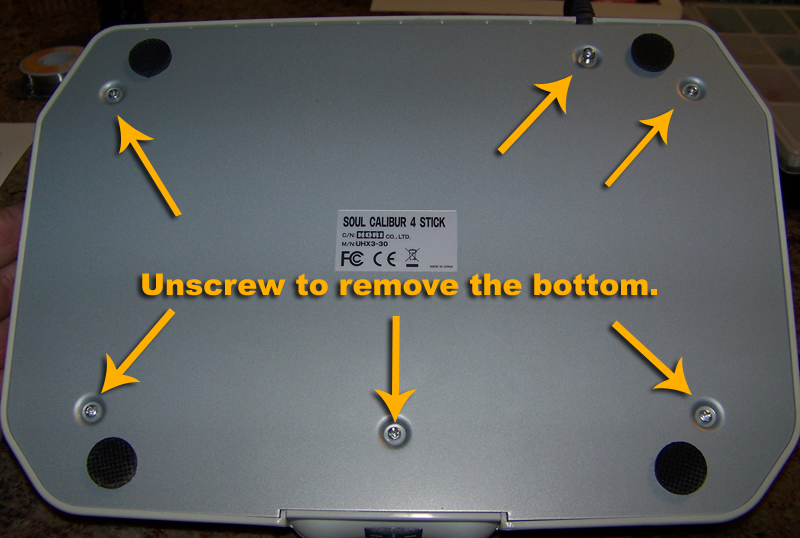 Step 1: Simply unscrew the six (6) screws and place them into the storage container.  Carefully remove the metal plate and set it aside. 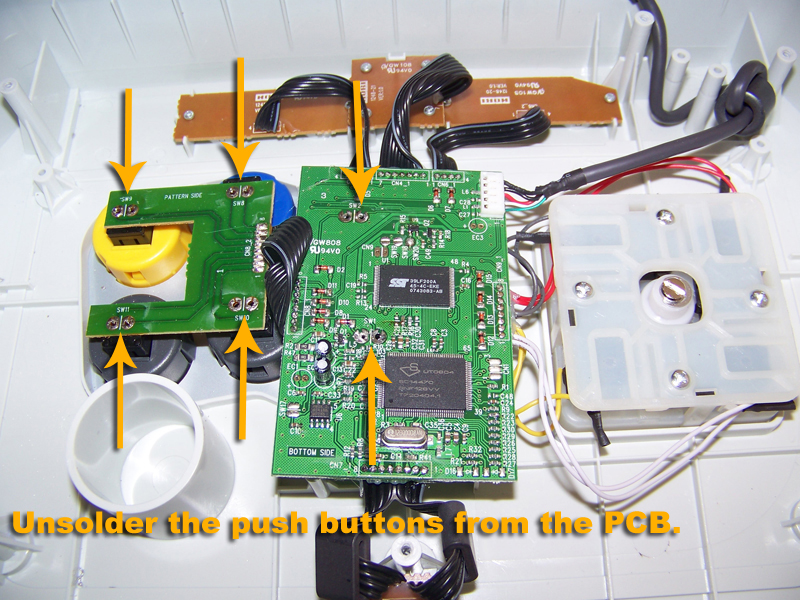 Step 2:  Unsolder the 2 points for each buttons (a total of 12 points).  Use the solder sucker to remove the melted solder.  You should start at the daughter board first and work your way towards the main PCB.  Gently pull the PCB free from the buttons.  Carefully move the PCB out of the way to expose the six (6) buttons underneath. 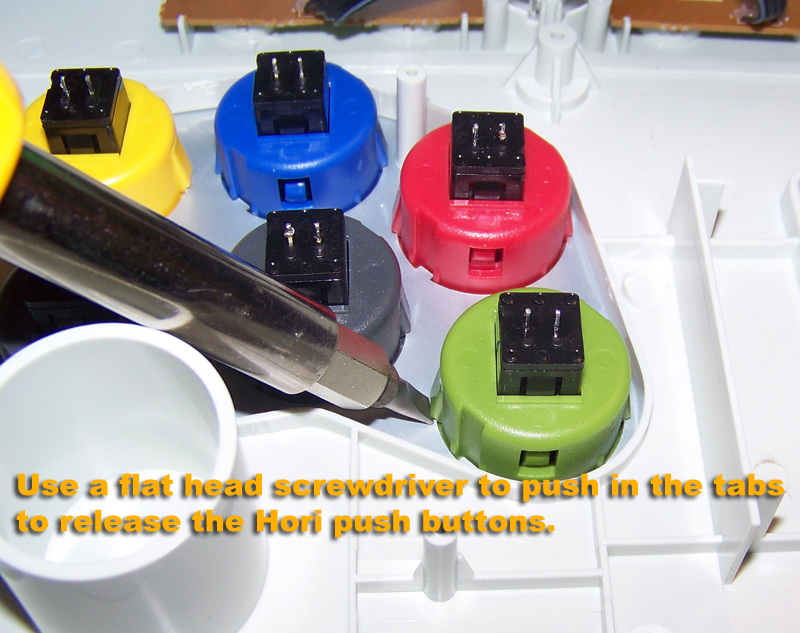 Step 3: Use the flat tip of the screwdriver and firmly press into the tabs holding the Hori buttons in place.  The buttons should “pop” right out when the tabs are pressed in.  Dispose of the cheaply made Hori buttons. 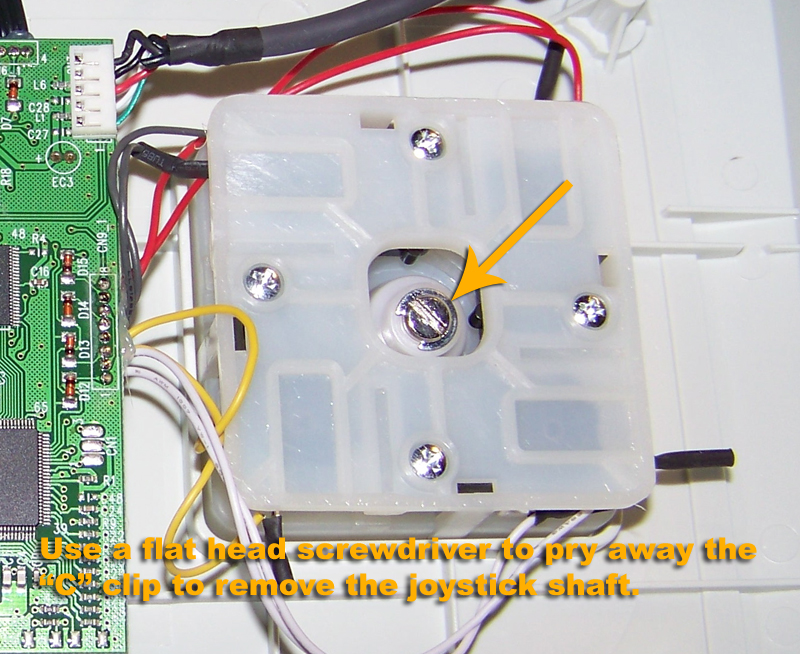 Step 4: Now that all of the buttons are removed, you need to remove the joystick shaft.  The only thing keeping the joystick in place in the small “C” clip holding the shaft and the spring in place.  Wedge the Flathead screwdriver to carefully remove the “C” clip. Gather up the shaft and the rest of the miscellaneous parts and put them into your  storage container.  DO NOT LOSE THE “C” CLIP OR ANY OTHER PART TO THE JOYSTICK! 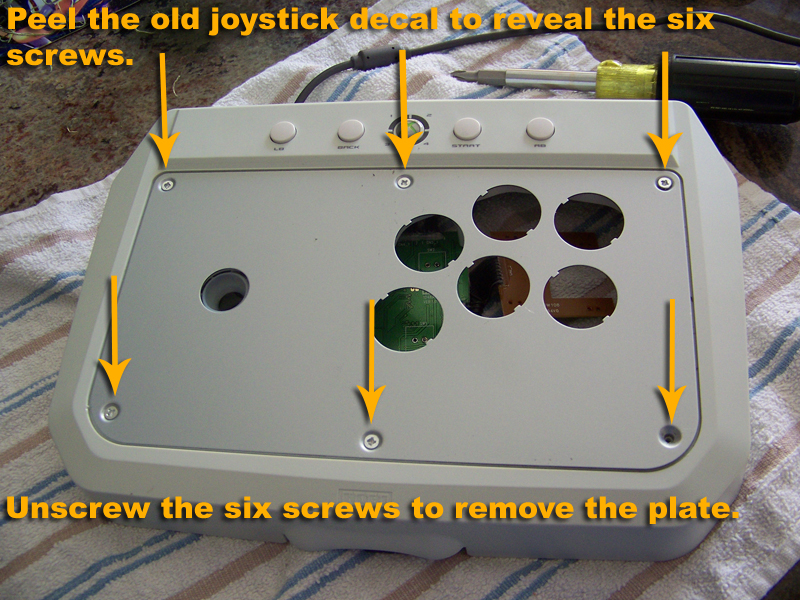 Step 5: Now that the buttons and the joystick shaft is removed, peel off the decal.  I used my razor blade to start the peel near the buttons and slowly but firmly pulled back.  If you go too fast, the decal will be removed but the glue will still be in place and that’s a bad thing.  If you are lucky the majority of the glue would have been removed.  Whatever glue that is left can be rubbed away with old fashion friction.  So, rub away.

After the plate piece has been stripped clean, use your Phillips head screwdriver and remove the six (6) screws to separate the plate from the joystick base. 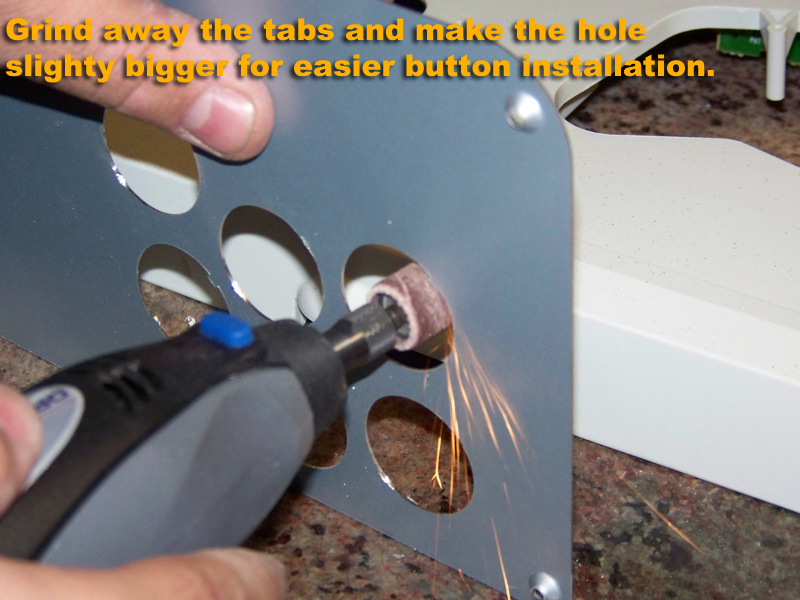 Step 6: DO NOT MAKE MY FIRST MISTAKE!* Dremel the tabs down, but do it away from your work area.  I walked my piece over to the kitchen sink and began to grind away. I carefully made the holes slightly wider just so I would not have to fight with the buttons when I was about to install them.

*My first attempt had left microscopic metal shavings all over my work area and that scratched up the buttons I was working with.  Dremel/file your tabs AWAY from your work area. 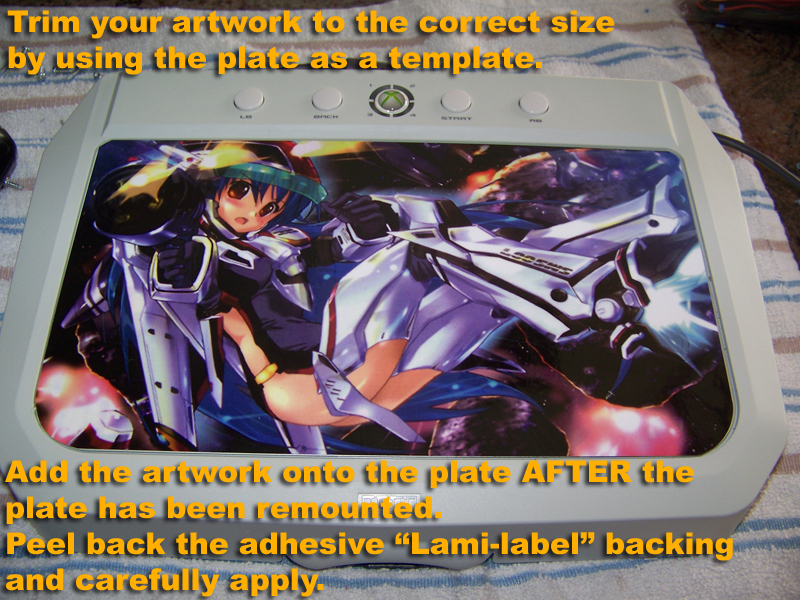 Step 7: Wipe down your plate of any and all metal shavings, because you will be using this piece as the template to cut your laminated art.  Place the plate over your at work and use a very sharp blade and slowly trim the sides to size.

After the artwork has been trimmed down, install the plate back onto the joystick base.  Screw the six (6) screws back in to secure the plate.  Now very carefully peel the adhesive backing on your artwork and place the artwork over the plating. 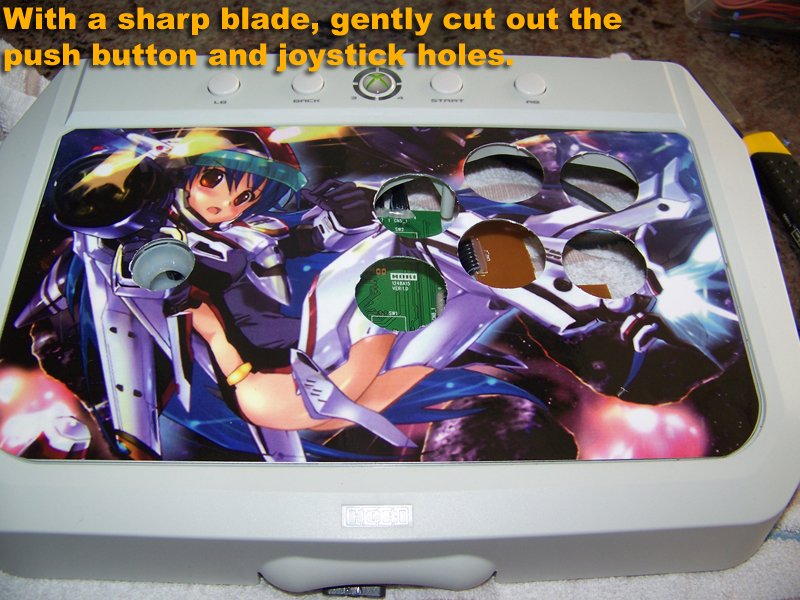 Step 8: Now with the artwork in place, use a sharp blade to cut out the button and joystick holes.  The sharper the blade the better, because you will have to cut through the artwork, laminate and the adhesive backing.  You want the holes as round and smooth as possible for easier button installation. 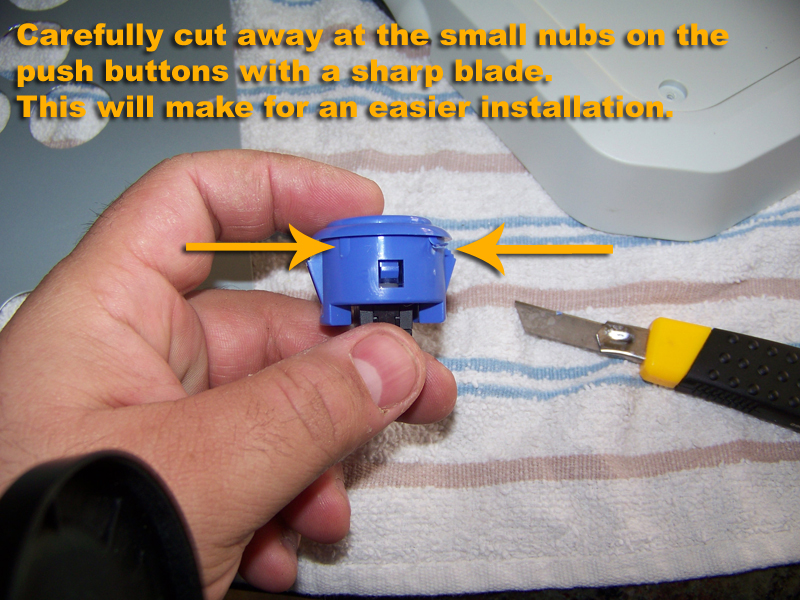 Step 9: Previously, I tested to see if the buttons would fit and for the most part they did, but they have smalls nubs that seemed to get stuck. So, I decided to just trim the nubs flush with the button’s sides.  Trust me, this will make the button installation much easier.  This step is optional, so it’s really up to you. 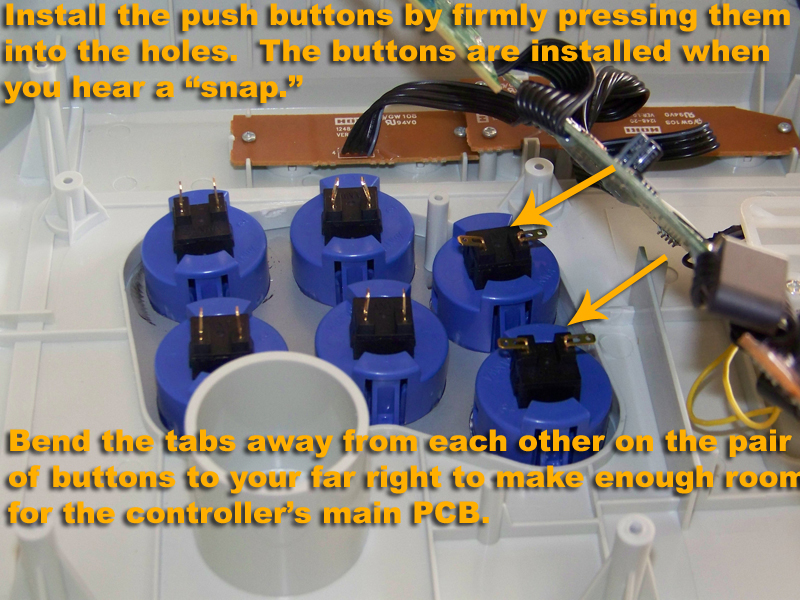 Step 10: Push all the buttons in place until you hear a “snap”, signifying the buttons are secured. Before flipping the base over to work on the back, be sure to lay out a rag or something soft to prevent scratches from forming on the buttons.  Bend the pins to the buttons on the far right to make more room for the main PCB control board.  You can push all of the pins down; it’s up to you. 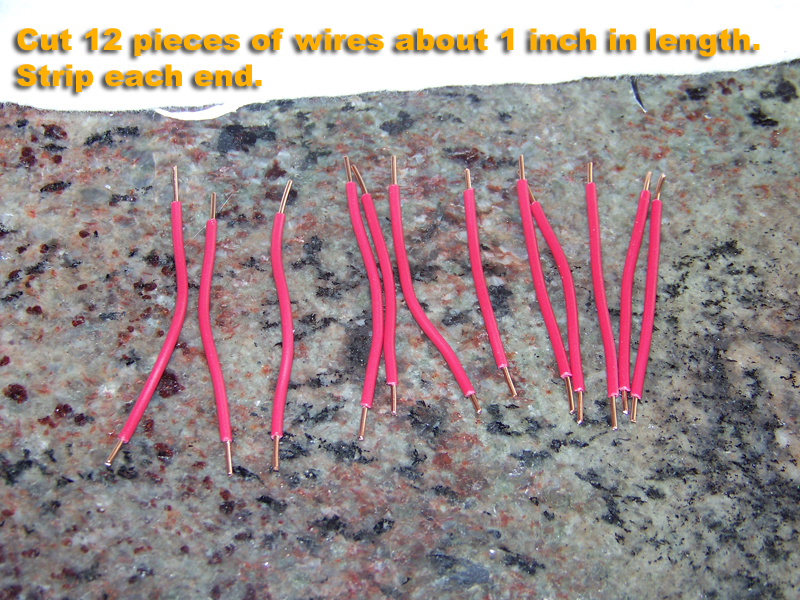 Step 11:  Don’t worry about trying to direct connect the push buttons pins’ to the PCB’s.  Cut twelve (12) short snippets of wires about one (1) inch long.  Strip each end like in the picture above.  You will use these short wires to connect the buttons to the PCB. 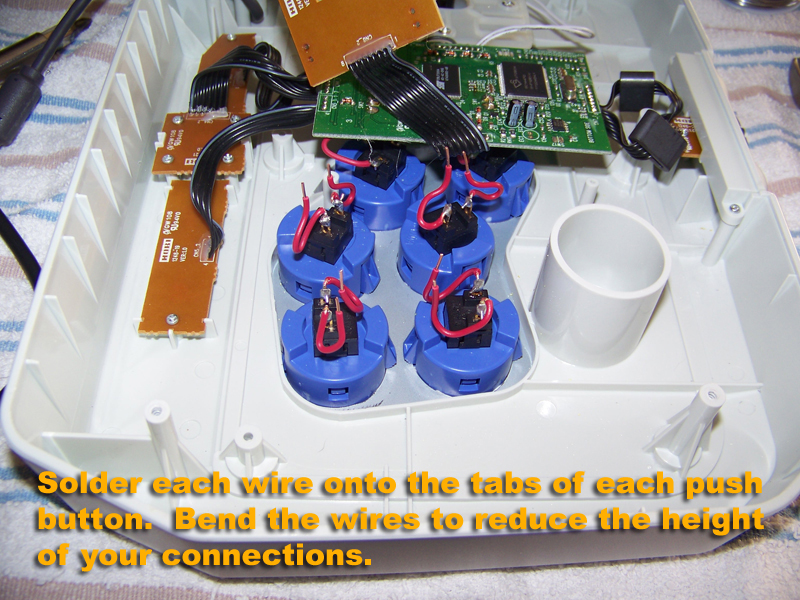 Step 12: Tin the ends of only one end on each wire then tin the ends to both pins on the push buttons.  Solder the tinned ends to each other.  Bend the wires so each ends are pointing up.  The wires will not only help keep the PCB’s from grounding out on the metal base, but also give you the flexibility to make everything fit inside the casing. 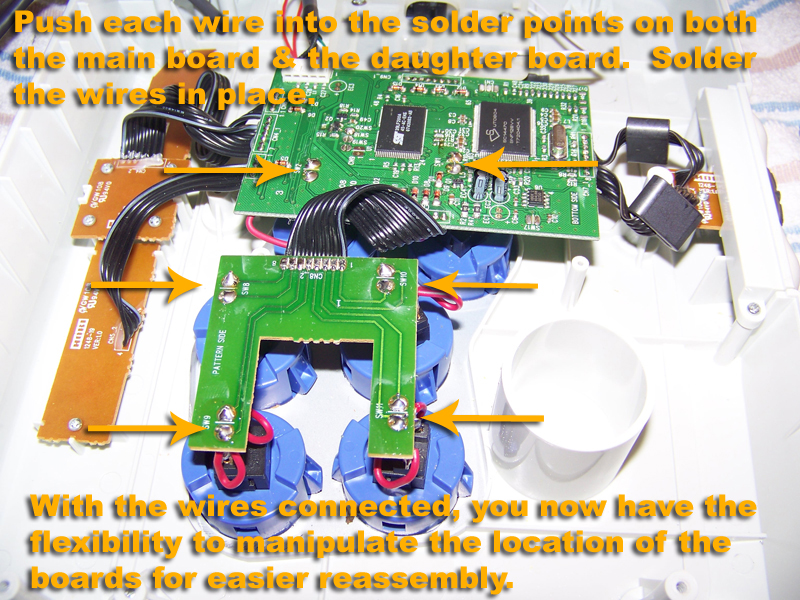 Step 13:  Feed the wires into the soldering points and solder in place.  Once everything is soldered, gently move the PCB’s out of the way where they are not in the way.  If you can muster the courage, the direct solder job* is the cleanest and more reliable route to go but I prefer the quick and easy route; therefore, I’m soldering onto the daughter PCB. Congratulations, you have now installed Sanwa buttons to your joystick.

*Option: If you want to make this mod more bad ass you can unsolder the daughter PCB and solder longer pieces of wire directly onto the main PCB. I decided against this method because there is too many places were I can destroy the main PCB and I don’t feel that confident with my soldering skills to do that precise soldering. 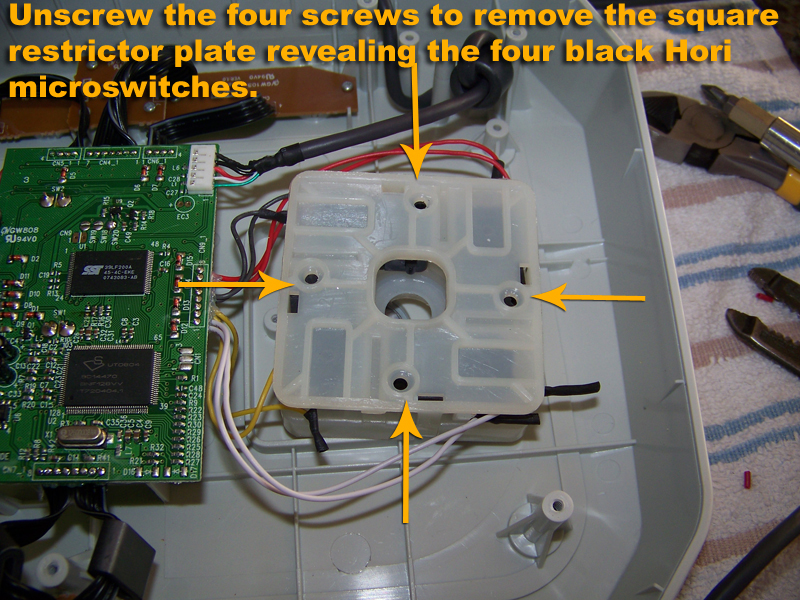 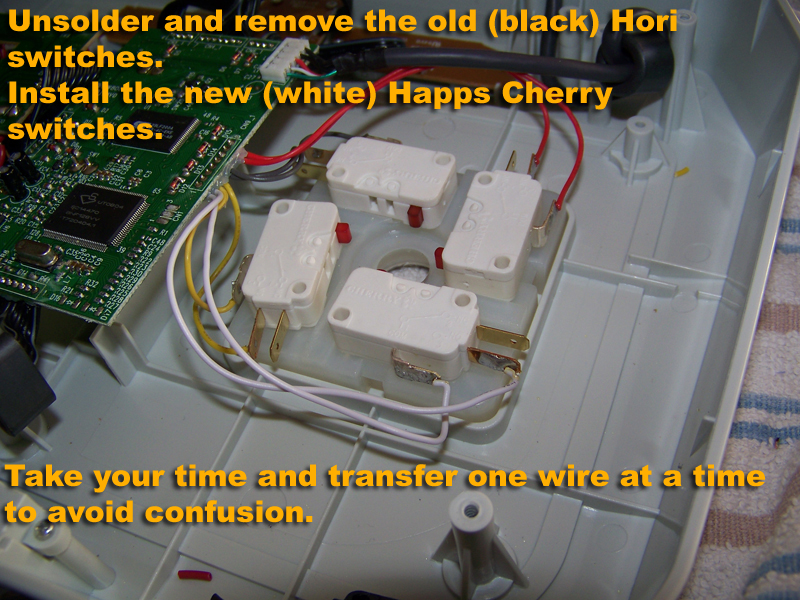 [Update: I guess there has been some confusion on which micro-switch you should purchase from Happs.  So here you go.] 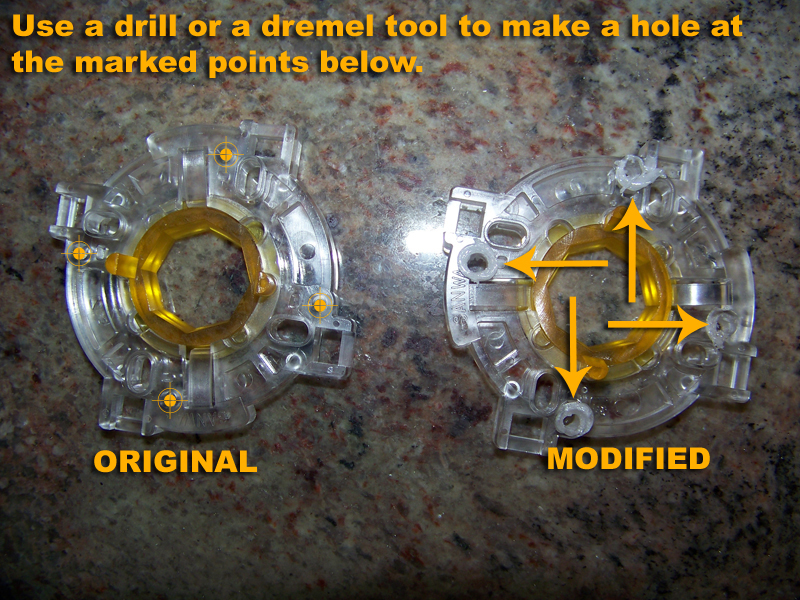 Step 16:  There is four specific spots that needs to be drilled/Dremeled out in order for the new 8-way restrictor to fit onto the micro-switches.  Make sure the two nubs in the yellow center ring are pointed up at you.  You will see the four points since they are indented already.  Just fit your bit into the hole and slowly drill out to the other side of the restrictor plate. 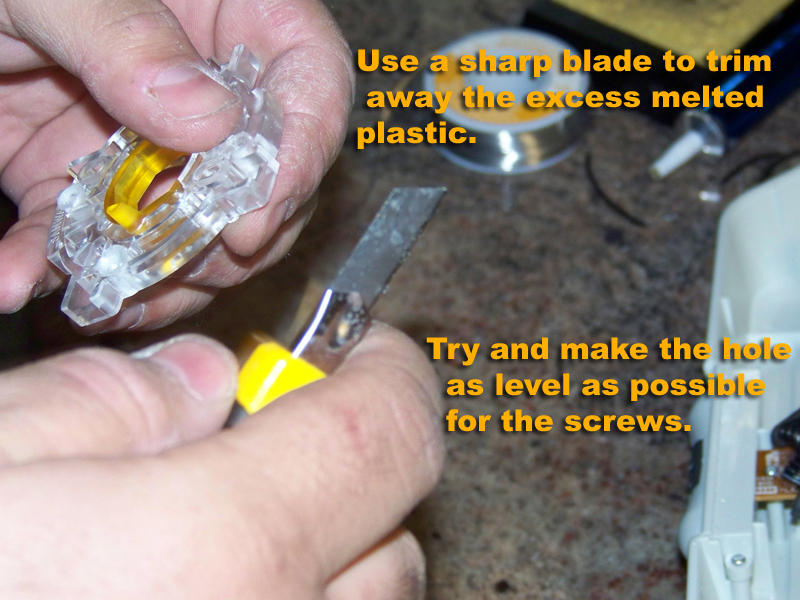 Step 17:  Since I used a Dremel tool to drill out my holes I got some melted plastic that formed around the new holes.  Just take a sharp knife and carefully cut away the excess.  You want the hole to be level with the restrictor plate because the head of the screw will need to lay flat against it. 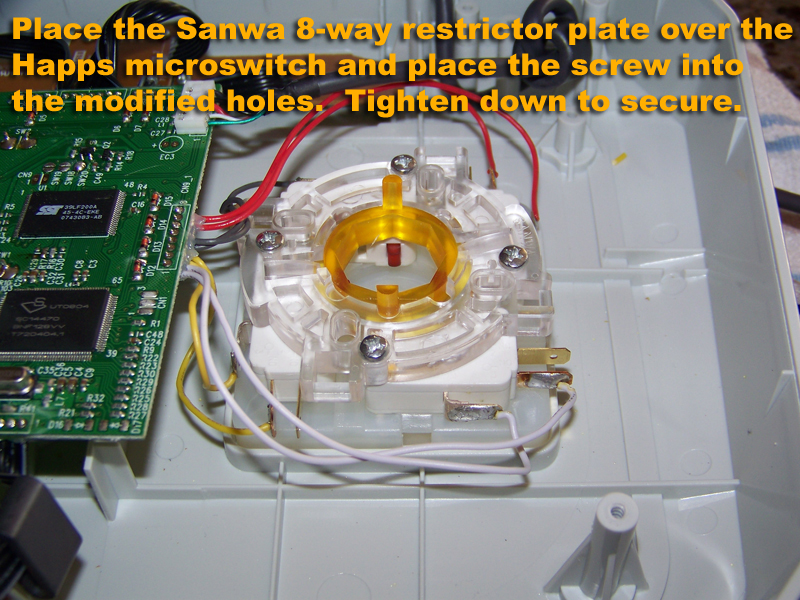 Step 18: Now lay your modified 8-way restrictor plate over the four (4) Micro-switches and screw them down with the original four (4) screws.  The switches should now be held in place and looking good. 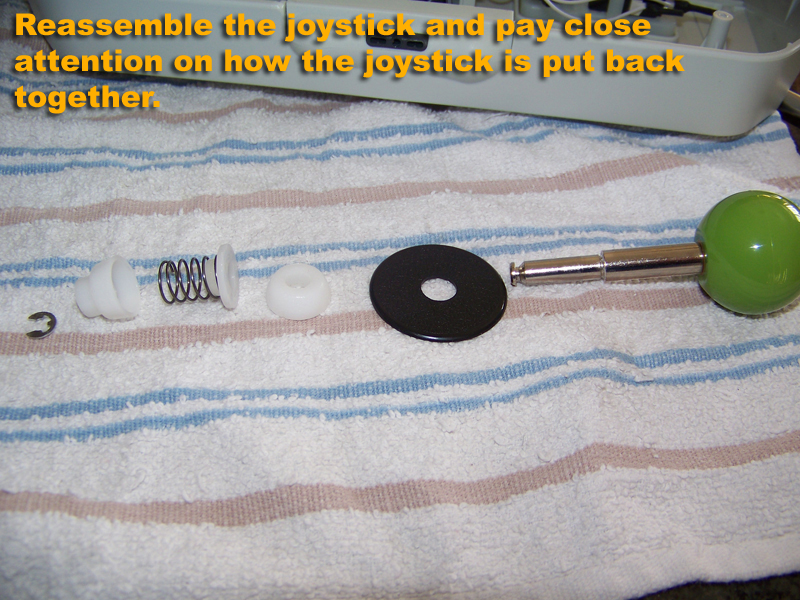 Step 19: For some silly reason, this step confused the hell out of me and I needed to look at another joystick to see how it was put back together, which is why I took this picture.  The shaft (with lollipop ball), dust cover and the curved plastic washer are to be put together is that order and placed on the top side of the stick.  The two plastic piece are sandwiched between the spring and is installed on the bottom of the shaft from the bottom side of the stick.  The “C” clip is what holds everything in place.  Once everything is assembled, your joystick will now feel smooth, due to the new restrictor plate.  Now install the base cover plate and screw down with the six (6) screws. 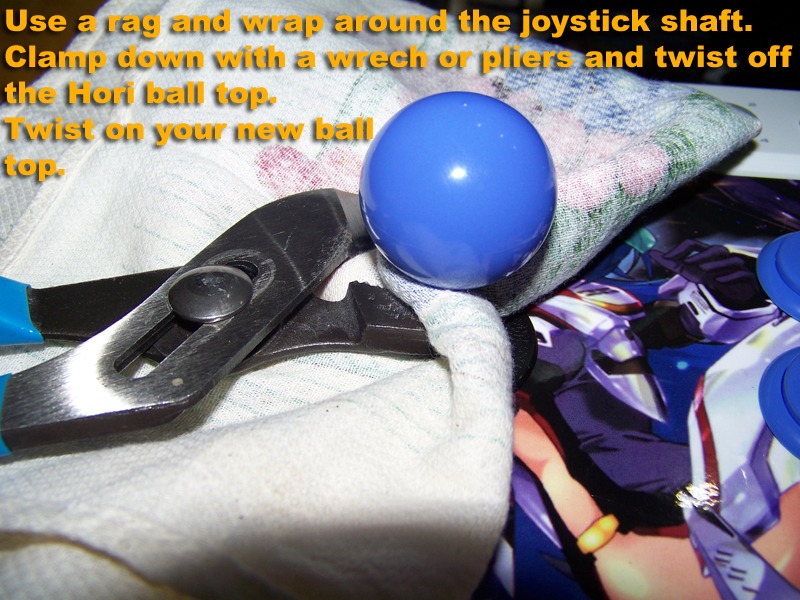 Step 20: With a rag around the joystick, clamp down with an adjustable wrench or pliers and twist the top off with your hands.  Take your new ball top and twist on to finally complete your mod. 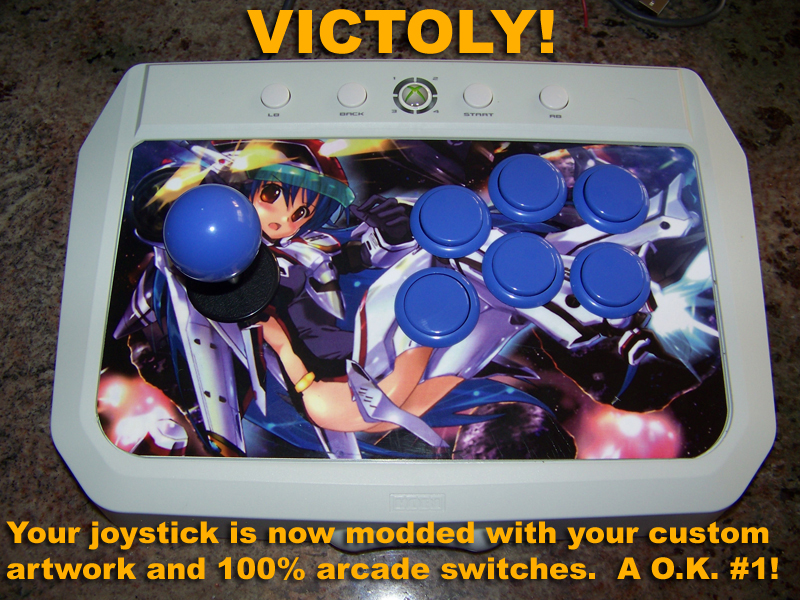 Congratulations, you finished your joystick.  Now, go kick ass or get your ass handed to you in Street Fighter and quit complaining about the controller. 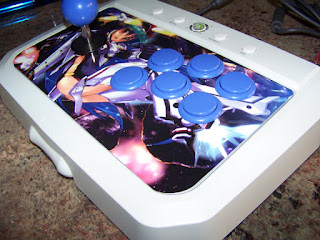 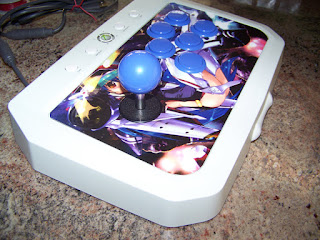 This week we have the Bias Brothers as we discuss the TMNT Cowabunga Collection, Adam has a popcorn flix recommendation, Nathan got a new ca... 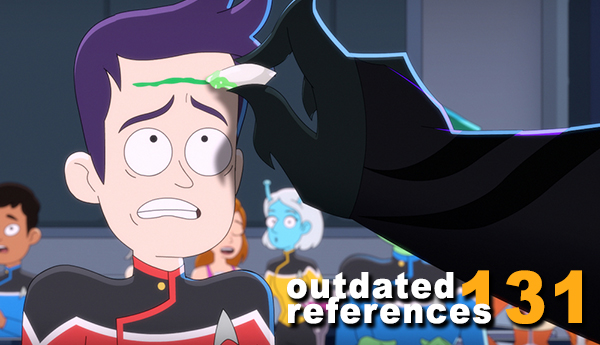